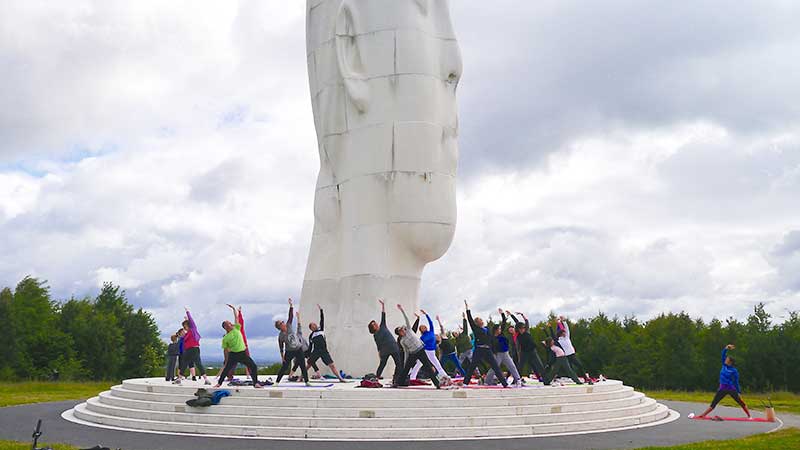 Thank you for your patience!  For those of you making a pilgramage to St Helens for this event. The Dream is pleased to support the local community. The picture below is ‘International Yoga day in Delhi, India’.

What is International Yoga day?

Prime Minister of India, Narendra Modi asked the world leaders to adopt an International Yoga Day, saying that by changing lifestyle and creating consciousness, it can help us deal with climate change. Addressing the 193-member UN General Assembly in United Nations. Modi said “Let us work towards adopting an International Yoga Day,” Noting that Yoga is “an invaluable gift of our ancient tradition”, he said: “It is not about exercise but to discover the sense of oneness with yourself, the world and the nature.”

“Yoga embodies unity of mind and body; thought and action; restraint and fulfilment; harmony between man and nature; a holistic approach to health and well being,” he said, adding “By changing our lifestyle and creating consciousness, it can help us deal with climate change.”

Solstice at the Dream class Schedule:

Class times and instructors are subject to change.  All registrants will be informed about any adjustments prior to the day. The morning consists of free Pilates and Yoga for the local community.

What is the Solstice?

THE SOLSTICE AND THE CALENDAR

The solstice has been observed as a special moment of the annual cycle of the year since neolithic times. The concentration of the observance is not on the day as we reckon it (commencing at midnight or at dawn), but on the pre-Christian beginning of the day, which falls on the previous eve.

Today, Summer Solstice is still celebrated as a Wiccan sabbat (one of eight major seasonal festivals), called Litha. Every year, a celebration takes place at Stonehenge. This tradition dates back to pre-Christian fertility celebrations.

Midsummer has been Christianized as the feast of Saint John the Baptist. In the 7th century, Saint Eligius warned the recently-Christianized inhabitants of Flanders against pagan solstitial celebrations:

“No Christian on the feast of Saint John or the solemnity of any other saint performs solestitia [summer solstice rites] or dancing or leaping or diabolical chants.”

Despite the Saint’s imprecations, modern Solstice celebrations contain a rich mix of Christian and Pagan elements.

In Denmark the solstitial celebration is called Sankt Hans Aften (“St. John’s Eve”). It was an official holiday until 1770 and, in accordance with the pre-Christian tradition of beginning the “day” at sunset, it takes place on the evening of June 23. On this evening, medieval wise men and women (the doctors of their day) would gather healing plants for use throughout the year (it was believed that plants picked on this night possessed special potency). The solstice has been celebrated in Denmark since the times of the Vikings by visiting healing water sources and making a large bonfire to ward away evil spirits. Speeches, picnics and songs are also traditional. In the 1920s a tradition of putting a witch made of straw and cloth on the bonfire emerged as a remembrance of the church’s witchburnings from 1540 to 1693.

Midsummer’s Eve is in Sweden and Finland considered the greatest festival of the year, comparable only with Walpurgis Night, Christmas Eve, and New Year’s Eve. Before 1316, the summer solstice was called Ukon juhla, after an old Finnish god, Ukko. The biggest bonfire at a given celebration was called Ukko-kokko (the “bonfire of Ukko”). At present the midsummer holiday is known as Juhannus, or midsommar for the Swedish-speaking minority, and is the year’s most notable occasion for drunkenness and revels. Will ‘o wisps were believed to appear on this night and mark the location of hidden treasure. Because Midsummer is one of the times of the year when magic is believed to be the strongest, it is seen as a good night to perform rituals to look into the future. Today, young girls pick bouquets of seven or nine different flowers and put them under their pillow in the hope of dreaming about their future husband.

In Estonia and Latvia, Midsummer’s Eve and St John’s Day are two of the most important days in the calendar, marked by bonfires and parties. Traditional diversions include jumping over bonfires and flower-picking.

In Jersey, off the coast of Normandy, the custom known as Les cônes d’la Saint Jean was observed as late as the 1970s – horns or conch shells were blown. Ringing the bachîn (a large brass preserving pan) at midsummer to frighten away evil spirits survived as a custom on some farms until the 1940s and has been revived as a folk performance in the 21st century.

In parts of Norway, a solstice custom of arranging mock marriages, both between adults and between children, is still kept alive. The wedding was meant to symbolize the blossoming of new life. Such weddings are known to have taken place in the 1800s, but the custom is believed to be older.

In Great Britain, from the 13th century Midsummer was celebrated on Midsummer Eve with the lighting of bonfires, feasting and merrymaking. The tradition declined significantly during the Reformation, but persisted in rural areas up until the nineteenth century. Other Midsummer festivities had uneasy relations with the Reformed establishment. The Chester Midsummer Watch Parade, begun in 1498, was held at every summer solstice in years when the Chester Mystery Plays were not performed. Despite the cancellation of the plays in 1575, the parade continued; in 1599, however, the Lord Mayor ordered the parades banned and the costumes destroyed. The parade was permanently banned in 1675. The association of the solstice with dramatic performance was permanently cemented, however, by Shakespeare’s A Midsummer Night’s Dream.

VISIT ‘THE DREAM’WEBSITE
Any Questions? Get in Touch Here
Page load link
Go to Top