Improve your Swimming Training and Technique - Pilates and Yoga for Swimming

Swimming Training has a low incidence of serious injuries due to the lack of force or strain on the muscles.

Problems tend to arise only because of over-training or over use. Swimming injuries mainly occur in the shoulders, back and knees. Shoulder injuries relate to the repetitive and high speed movement of the rotating arms and the effort involved in controlling your position in the water and poor Swimming Technique.

Problems arise through an in balance of muscles or an inflammation of the muscles around the shoulder joint. These injuries can cause pain and limit the ability to swim effectively. Pain to the knee area is usually associated with the breast-stroke kicking action as incorrect kicking action can place strain on the ligaments.

“In Swimming Training, speed comes directly from the core so Pilates helps immensely.”

Dara Torres is more than your average Olympic athlete: she has set three World records, holds 13 National titles and owns nine Olympic medals, four of which are gold. Torres is the first U.S. swimmer to compete in four Olympic games and now, at 41 and a mother of a 2-year-old, she’s concentrating on a fifth – in Beijing. 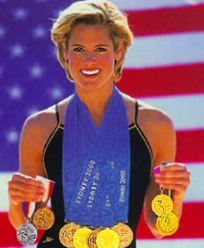 Dara Torres is an inspiration to anyone whose body feels less vigorous or flexible than it did in, say, 1984. That was the year that Torres was a nervous 17 year old participating in her first Olympics, helping her American relay team win gold in those Los Angeles Games.

After multiple surgeries,retirements and the birth of her 2 year old daughter Tess, this amazing women has qualified once again to represent the United States Of America at the Beijing Summer Olympics in the 100-meter and the 50-meter freestyle events.

To qualify for the 2008 Olympics she punched through the semifinals in in 53.76 seconds, her best time ever, just 12 hundredths of a second behind the day’s fastest, Natalie Coughlin another amazing Pilates Olympian.
It is a tremendous accomplishment to to think that her Olympic competitors from around the world will be younger than the vintage goggles Torres often wears in competition.

Some say it is their Hi-tech Speedo swimsuits others say it is steroids that enables this smoking hot mom to play long and strong. The secret ingredient that gives many Olympic athletes the edge to be the best they can be and keeps them looking great and enabled them to play long and strong is Pilates and the principles it was founded on. Incorporate Pilates into your workout routine today and keep yourself looking and feeling great as life goes by.