Running is a sport of passion; Why else would we torture our bodies with miles of punishment every day?

Running injuries are an unfortunate, but all too common, occurrence. The most common injuries occur in the lower limbs (calves, ankles, Achilles tendon) and lower back. These problems occur due to poor technique, uneven surfaces, muscles overuse, excessive training or incorrect footwear. Running along on hard surfaces can in time, cause muscle strain and damage to The joints. Pilates & Yoga for runners aims specifically to give Running Stretches, help strengthen the lower back, reducing pressure caused by constant jarring on the spine during a run, and provide a Pilates & Yoga Running Training Programme.

“I used to regularly run four miles three times per week until I was diagnosed with two prolapsed discs. At age 33 I did not want to have to have an invasive operation to correct this. When I first met Nisha to discuss rehabilitation I was struggling to walk and it was painful to sit down. I was unsure whether I was strong enough to do Pilates. 12 months later, I am virtually pain free with better mobility than before my injury. Although running is no longer an option for me, the combination of walking and Pilates twice a week has left me in better shape than before.” 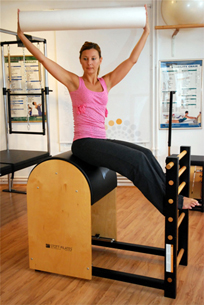 Running injuries are very specific due to the repetitive nature of the sport. Injuries are caused either by the body’s own intrinsic factors or by extrinsic factors. If there is a biomechanical abnormality anywhere along the chain from the feet up, then injuries can occur. The most common problem is feet that collapse and overpronate causing the leg to turn in and pressure on the Achilles, shin, knee, hip and spine. If you over pronate then you need stability trainers or running shoes to support the foot. In extreme cases where the runner is injury prone, orthotics may be prescribed.

The body works on a closed chain system when running i.e. when the foot is in contact with the ground, the forces and mechanics are transmitted along the leg to the spine. This is repeated every step and means if anywhere along this chain is out of line then potential injuries can happen.

Most specialist running shops will be able to look at your feet and tell you what foot type you are. Squinting patella and hips and knees that turn in are also common problems especially in women. Again these means these areas and those above and below are placed under extra strain, leading to injuries this is why a Pilates & Yoga Running Training programme consisting of running stretches is enough.

“An immediate and hugely important benefit for me is improved core strength. I have a weak right hip. Previously my body compensated for this by utilising muscles it shouldn’t, leading to calf strains, sciatic nerve flare ups and ITB tightness. All of which stopped me running (the real agony as any runner knows!) A strengthened core is helping me keep the hip balanced which means fewer strains, reduced tightness and happier running!”

A lot of biomechanical problems can be corrected using a Pilates & Yoga Rehabilitation Running Training program. For example, knees that fall in (giving a knock-kneed appearance) are usually the result of weak hip abductor muscles which would usually act to pull the thigh and so knee outwards. Tight hip flexors are also a very common problem with runners as the hip flexors are repeatedly contracted and shortened. I would advise all runners to include simple Pilates & Yoga Hip Flexor running stretches in their warm up.

“I have been competing in triathlons/duathlons for approximately 6 years, completing numerous events including Helvellyn Triathlon and a challenging Half Ironman in the Lake District earlier this year. My next event is Tatton Park Triathlon. I have been attending Nisha’s classes for just over a year now and they have assisted me immensely in recovering from a Sports Hernia operation allowing me to compete pain free!”