Pilates and Yoga for Cricket – Cricket Stretches and Cricket Injuries

The best Cricket Injuries research has come from Australia under the direction of Dr John Orchard. Cricket Injuries at elite level In Australia have been demonstrated to occur at a rate of around 18 injuries in total for a squad of 25 players who play twenty matches in a season.

There are very different physical demands involved in different types of cricket, which has meant the injury profile is slightly different between five day Test Matches, 3 day matches and one day matches. The launch of Twenty20 cricket has placed a new physical requirement on cricketers, although it is too early for the effects of these demands to be analysed in sports injury research.

Low back pain is particularly prevalent among younger fast bowlers. The repetitive action of bowling for long spells places excessive stress on the tissues of the lower back, where stress fractures of the vertebra (Spondylolysis) can develop.

Cricket may be a relatively slow-paced game, but still injuries can occur. Most Cricket injuries occur in cricket as a result of players being hit by the ball. In addition, bowling can occur shoulder injuries and pulled muscles. Fielders, who often spend long periods of time standing still, may become injured when they are called to make sudden movements.

In Shane Watson, Australia has a talented all-rounder in their midst with the hunger to re-ignite Australia’s one-day squad after he missed the majority of the Australian summer with one hamstring problem after another.

“It says a lot that I was able to get back so quickly this time after a hamstring strain… My inner-core strength used to be really poor, but I’ve been working on getting that strong. I’m doing a lot of Pilates and Yoga Cricket stretches. I’m doing less gym work and more running to get my body used to what it needs to do.”

The persistent hamstring injury destroyed his Ashes dreams and forced him to wait until the end of the summer to seal his World Cup berth. This time a calf problem interrupted his tournament, but he still managed to make an impressive mark with his batting and fielding – the run-out of AB de Villiers in St Kitts was outstanding. In six innings spent mostly in the lower order, he was dismissed only once and showed power and innovation in clouting 145 runs at a strike-rate of 170. 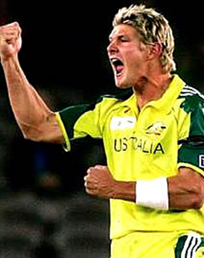 Watson, 26, said “The Cricket injuries definitely got me down,” he said. “I’m feeling good now and I’m excited about what might be coming up, not worried about what’s happened before.” Because of his injury Shane Watson will be used only as a batsman for Queensland in the 2008 Pura Cup match.

The secret weapon to Australia’s cricketing success in India has been revealed.

For the first time, a yoga teacher has joined the logistics team supporting the Australians, giving them the chance to explore the Indian secret to mental and physical discipline.

Opening batsman Justin Langer was quick to sign up. A long-time martial arts fighter, he had been meaning to get around to yoga for years.

Four weeks into the tour, he has been a stalwart of the sessions that run for 1¼ hours after play. He says they have balanced the “flogging” he gives his body in training sessions.

They have also aided the recovery essential to enduring five-day tests and which has become harder now he is 33 years old.

“I have never felt fitter and stronger, I just feel really good, I feel really in tune with my body,” he said. During a break in the Indian series Langer decided to immerse himself further.”

He joined the team’s yoga instructor, Kate Turner, and fitness trainer, Jock Campbell, on a road trip from Bombay to one of the world’s most famous practitioners, BKS Iyengar.